5 Tips For Dealing With That Awkward Best Man Speech 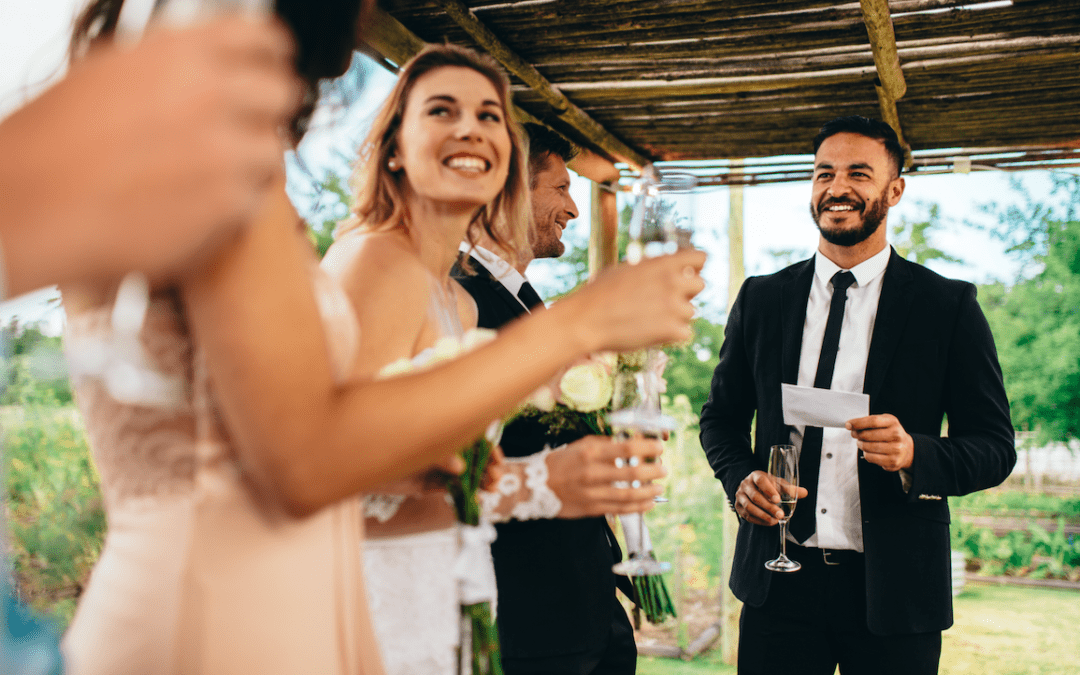 Your best friend of 10 years has asked you to give the Best Man speech at his wedding on Saturday. You’re hoping that you’ll still be friends afterwards. Don’t worry I’ve been a Best Man four times and managed to stay friends with the married couple after each one of them. Here are my tips on how to deliver a cracking speech.

1. Don’t Get Drunk Before The Speech

Swaying from side-to-side and slurring is never a great look, particularly when you are giving a speech on the most important day of your best friend’s life, in front of his extended family. Drinking six pints of lager before you stand, will leave you with more to regret than a hangover the next day. Although you are speaking, you want all the attention to be on your friend and his wife, not on the tie which you just dipped in the mustard, while trying not to fall over. Another risk of speaking while intoxicated is that you either ramble on for hours or give a ten-second speech and stand-up then sit-down so quickly, that it looks as though you’re playing musical chairs on your own. Remember that whatever nerves you may be feeling will be 10x less than what your friend is going through, so stay sober, and give him the quality speech he deserves.

The wedding will most likely be attended by both the bride and groom’s parents, grandparents, and possibly even the couple’s children or nephews and nieces. This is not a good time to mention ‘that time in Maga where we drank two bottles of tequila and then….’. It is also not a good time to swear or make inappropriate jokes. Getting the tone of the speech wrong will almost certainly upset the Bride and Groom, putting a dampener on their whole day.

You may not be best friends with your friend’s fiancée. You don’t need to be. All you have to do is accept that this is the woman who your friend loves and wants to spend the rest of his life with, and treat her with respect. Any comments about how well you got on with his ex, how you think that your friend ‘was getting on a bit so had to take the plunge,’ or revealing anything intimate that he may have told you in confidence about his relationship with his wife-to-be, will mortify everyone in the room, particularly the married couple.

Your first instinct when preparing your speech will be to write everything down on about four-sides of A4 and then read from these notes during the speech. This approach will only make the event more difficult for you, as you’ll almost certainly get lost on one page. Reading from notes will also make your delivery static, nervous, and boring. By bullet-pointing the bulk of your material for the speech on cue cards, you can make sure that you get your main points across while delivering your speech spontaneously.

Sometimes you’ll say something which you thought was funny that doesn’t get any laughs. Sometimes, you’ll say something which seems mundane, but everyone finds hilarious. You have to just go with the flow and adapt to the room around you. If you suddenly find yourself stuck for what to say, and left your cue cards at the hotel, find something in the room that you can comment on to get going. Once you get the first few remarks out of the way, the rest should come naturally.

Hopefully, these tips will help you to deliver a Best Man speech which your friend will love. If you’re in any doubt over which anecdotes to include in your material, it might be a good idea to consult another one the Groom’s friends or family members, to double-check what will (or won’t) be well received.